Italo-Normans vs Muslim Sicilians Circa 1050 AD

Back to the gaming table with an updated list for the Italo-Normans after receiving Army List Book 3.

The Khalbid Emir of Sicily, Hasan al-Samsan withdrew from public life in the year 1044 AD leaving various Muslim lords to battle over the control of the island.  The Emir would linger on until 1053 AD but never again exercised any control over his warring lords.  But what if he had...

In the year 1048, a little known son of the Emir, Zerief ibn Hasan ibn Malkut al-Samsun rose from obscurity to bring the warring lords back into the fold.  By 1050 AD, the stage was set for another Muslim descent into the boot of Italy.  Using traders and smugglers to keep him informed of the troubles between the Normans and the Lombards, Zerief perceived an opportunity and in the early Spring of 1050, his host descended on the lands surround Amalfi.  Prince Guimar of Salerno, alarmed by the arrival of the Muslim force so close to his capital saw an opportunity to use his new Norman Vassal, Richard Drengot, and quite possibly acquire Amafi at the same time.  Gathering the Normans at his disposal in Aversa, Richard marched hard to the hills around Amalfi to find the Muslim host deployed and awaiting his onslaught.... 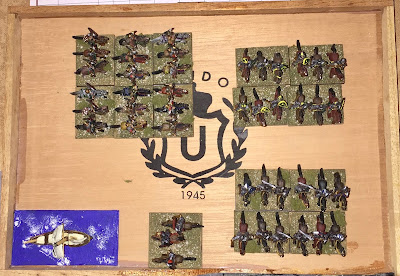 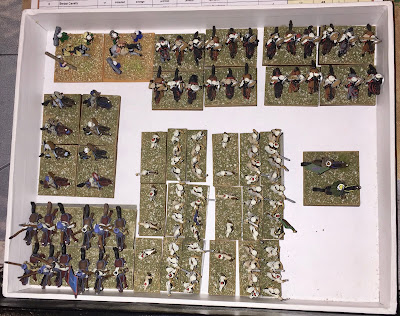 The Muslim won the initiative and opted for Hilly terrain.  The Italo-Normans (hereafter referred to as Normans) chose a compulsory gentle hill and an Impassable.  The Muslims chose a steep hill, a broken ad a brush.  The gentle hill ended up on the Muslim base line as did the brush.  The steep hill and the broken fell on the Norman side 4" from the side.  The impassable landed in the center of the Muslim deployment area but was picked up on a six.

The Moslem force won (or lost depending on how you look at it) the roll to move first.  The Moslem foot double moved straight ahead towards the Norman line.  The cavalry line moved 5" straight ahead.  The light horse moved 7" forward and slid 1 base to their left (top of the pictures).  The armoured lancer BG behind the light horse moved 5" forward and shifted 1 base to their left to come up behind the light horse.  There was no shooting on this phase and in the joint action, the Norman leader moved to the last stand of the green knights next to the blue knights.  The Moslem leader moved to the 2x2 BG of javelin cavalry. 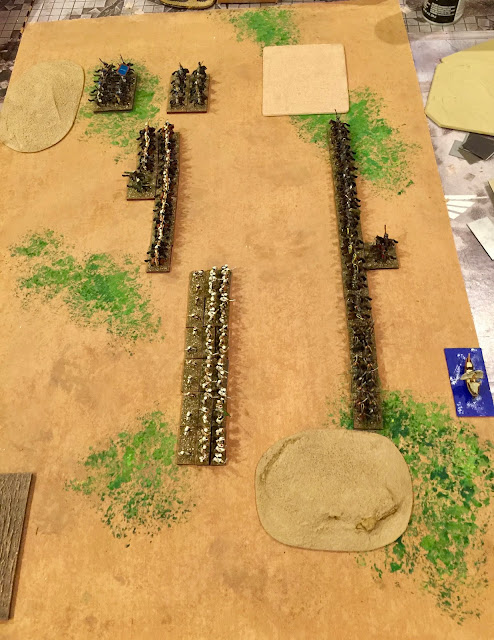 The Normans began their 1st turn by marching the dismounted knights 3" straight ahead keep their left (bottom of the picture) on the steep hill.The green knights (in the center) did a short move to stay even with the dismounted knights.  The blue knights performed a 5" move straight ahead.  There was no shooting this turn so the Norman 1st turn ended. 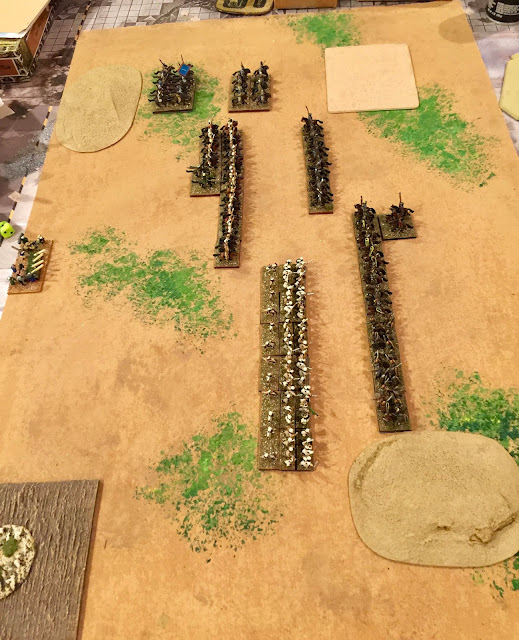 The Moslems had no charges to begin their 2nd turn so the light horse BG wheeled to come up on the flank of the blue knights stopping at 2".  The 2x2 javelin cavalry BG expanded 2 stands.  The middle javelin cavalry BG moved to 2" from the blue knights.  The Moslem spear opted to sit tight this turn. In the shooting phase, the light horse and the middle javelin cavalry managed only 2 hits total on the blue knights who easily passed their cohesion test.  In the joint action phase, the Norman leader moved one file over towards the left to come within 4" of the dismounted knights.  The Moslem leader moved to the blue flagged Moslem spear BG (center of the line).  At this point, the turn ended.

To begin the Norman 3rd turn, the Normans held all three BGs in the impact phase.  In maneuver, the green knights contracted 2 stands and advanced to within a gnat's dodger of the javelin cavalry BG to their front.  In the shooting phase, the green knights took only 1 hit while the blue knights took 2.  The blue knights shook off the shooting hits and the turn ended. 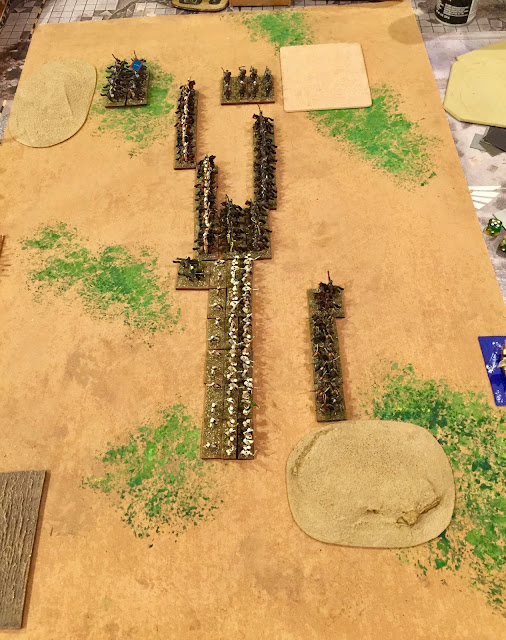 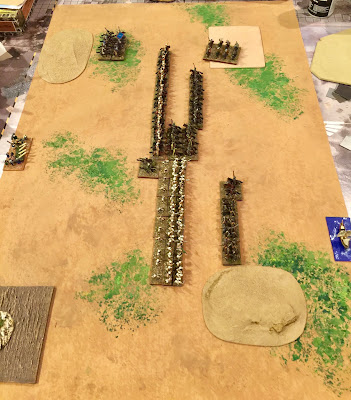 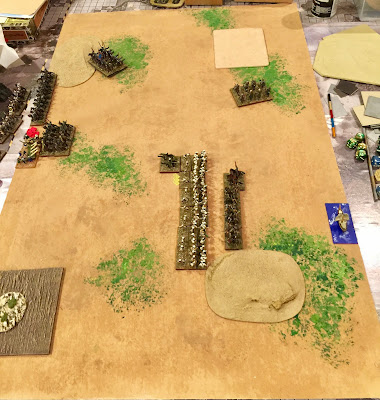 To begin the Norman 4th turn, the dismounted knights rolled successfully to hold in place.  Both the blue and the green knights successfully passed a CMT to turn 180 in place.  with no shooting or melee, the joint action phase loomed again and the disrupted Moslem spear BG in the center finally rallied ending the turn. 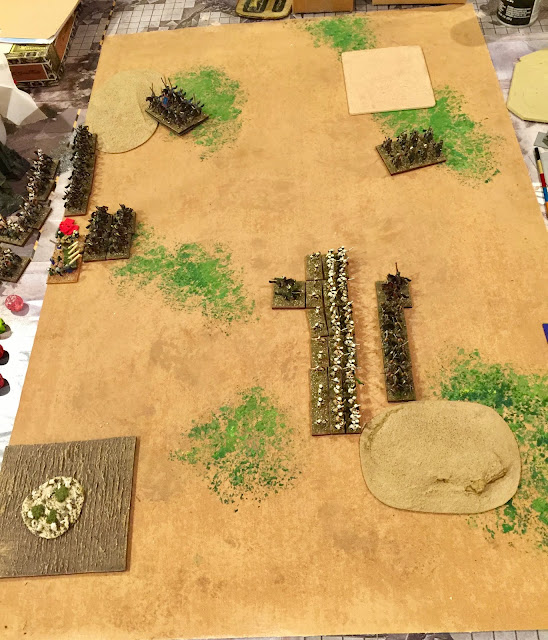 For the Moslem 5th turn, the armored Moslem cavalry BG attempted to hold in place but failed and charged straight into the blue knights.  In impact, both sides scored 2 hits ending in a draw.  In the maneuver phase, the center Moslem spear moved 1/2" towards the dismounted knights while the light horse BG moved 7" towards the Norman camp.  With no shooting the turn moved into melee.  the Moslem lancers scored 3 hits to 2 on the blue knights.  The blue knights shrugged off the hits and thumbed their noses at the Moslem cavalry keeping cohesion.  With nothing to do in joint action, the Moslem 5th turn ended. 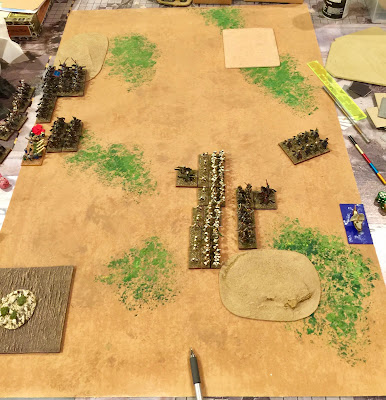 To start the Norman 5th turn, the dismounted knights passed a CMT not to charge and held in place.  The blue knights expanded a base into overlap on the Moslem lancer BG while the green knights moved 5" towards the Moslem foot.  Again with no shooting, the turn shifted to melee.  In melee, the blue knights scored 4 hits to 3.  The Moslem lancers suffered a base loss from hits while the knights suffered none.  The Moslem lancers then proceeded to drop to disrupted on cohesion.  Again with nothing to do in joint action, the turn ended. 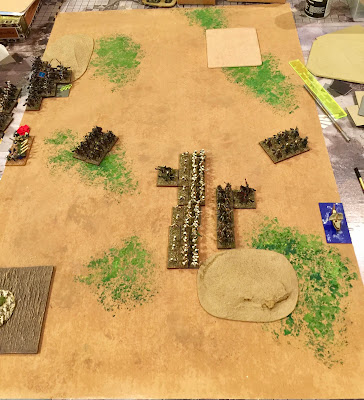 To start the Moslem 6th turn, the Moslem foot decided they could no longer wait on the dismounted knights to lose control and charge them so both Moslem spear BGs charged.  The green Moslem spear BG (closest to the bottom of the table) dropped a file back to avoid the difficult hill.  Both leaders immediately jumped into the front rank sensing this could be for all the marbles.  The light horse BG charged the unguarded Norman ships on the beach (the camp).  In the impact, each Moslem spear BG scored 3 hits while the dismounted knights scored 2 hits to the blue Moslem spear BG (the one with the leader) and 5 to the green Moslem spear BG.  Bth generals survived the impact.  The Normans lost a base to hits but the Moslems held firm.  Neither side dropped cohesion and the melee phase ended.  With no maneuvering or shooting to be had, the melee phase rose to the fore.  In melee, the blue knights scored 4 hits on the Moslem lancers and took 2.  The Moslem lancers passed their death roll but fragmented on cohesion.  The dismounted knights managed only 2 hits to the green spear Bg and 1 to the blue spear BG taking only 1 hit in total in return.  The green Moslem spear BG passed its death roll and cohesion test to end the melee phase.  In the joint action phase, the Moslem light horse failed a complex maneuver test to stop looting and the Moslem 6th turn ended. 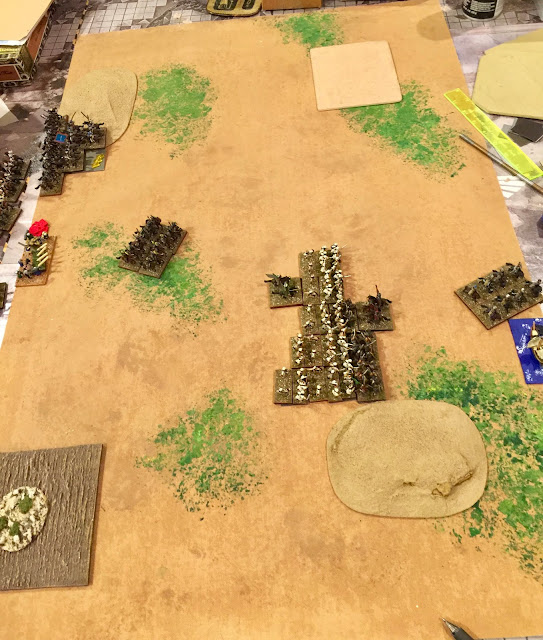 The Norman 6th turned dawned with no charges to be had.  The green knights continued moving towards the infantry battle.  In melee, the dismounted knights managed only 2 hits to the green spear Bg and none to the blue spear BG.  The Moslem blue spear managed 2 hits in return while the green spear managed none.  The green spear survived its death roll and maintained cohesion.  However, on the Moslem base line, the Moslem lancers only managed 2 hits to the 5 it received.  The continued pounding proved too much and 1 base disintegrated on the death roll causing the BG to break.  At this point the Moslem army broke ending on a 6-2 victory for the Normans. 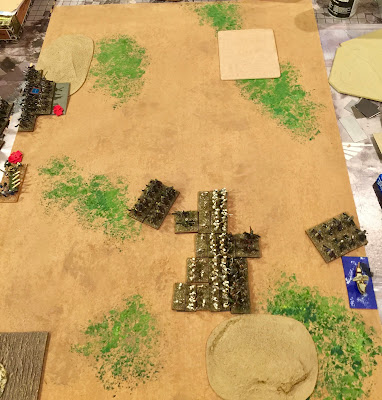 Thus ended another attempt of the Sicilian Moslems to sow discord on the Italian mainland.  Zerief, however, yet lives and chances are he will return for another chance at glory....