This time I chose Early Crusaders vs Seljuk Turks. 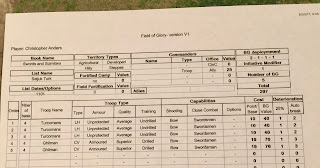 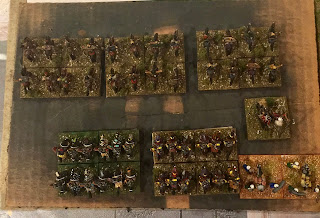 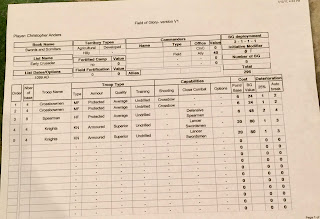 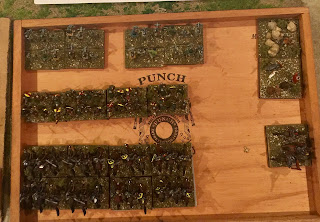 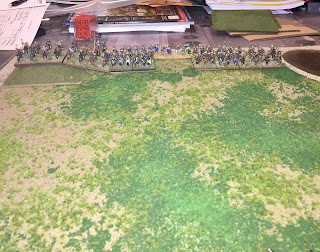 The Seljuks deployed with two Turcomans on the left on the hill and a Ghilmen next to them.  Another Ghilmen and the last Turcoman was deployed right up to the gully leaving a two stand gap in the center.

The Crusaders moved first and no one was within range for shooting.  The front rank spearmen and crossbow did a double-move and the knights moved a full move straight ahead.  The Blue Knights on the far right did a one base shift to the right. 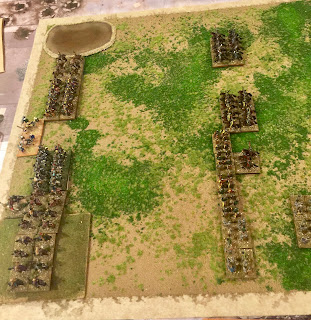 The Seljuk 1st move had both right hand Turcomans move 7 inches straight forward and wheel towards the table edge.  The Ghilmen next to them moved 5 inches forward.  On the other flank, the Turcomans moved forward and wheeled over to the left to come up in front of the Blue Knights but outside of 5 inches.  The left Ghilmen expanded two bases and advanced 3 inches. 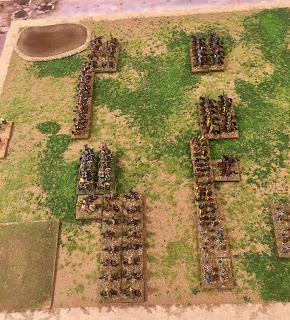 In the shooting phase, the Seljuks managed only 1 hit on the crossbow.  The crossbow responded with 3 hits on the Turcomans to their front.  The Turcomans passed cohesion and the death roll with no problem.

In the Crusaders 2nd turn, the Green Knights expanded in the middle.  The rest of the Crusader line stayed pat.  In the shooting phase, the Seljuks scored 2 hits on the crossbow who went on to disrupt.  The crossbow managed no hits.  The Crusader general slid over to behind the disrupted crossbow in preparation for the next turn.

In the JAP phase, the crossbow rally back from disrupted. 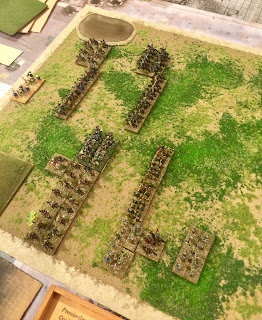 In the movement phase, the spear and crossbow moved up into the face of the right end of the Seljuk line.  The crossbow managed only 1 hit in the shooting phase.  The Seljuk return fire across the line is ineffective. 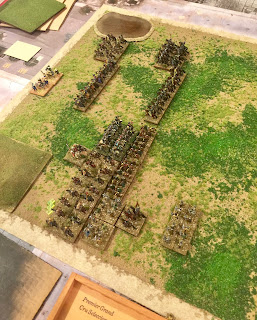 In the JAP phase, the right end Turcomans rallied from disrupted.

In the Seljuk 3rd turn, the left end Turcomans turned 180 and moved to within shooting range.  The yellow Ghilmen (left side) turned 180 in place. 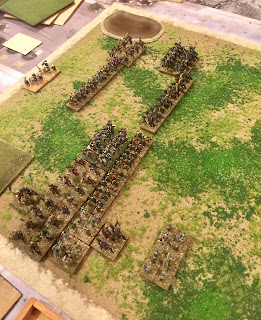 In the Crusader 4th turn, both knights charge.  The Turcomans evaded off the table.  The Ghilmen evaded 3 inches and came up against the camp.  They turned 90 degrees and attempted to wheel past the camp.  Lucky for the Seljuks, the Green Knights rolled up but ended up just behind the Ghilmen.  The Blue Knights stopped just behind the Green Knights. 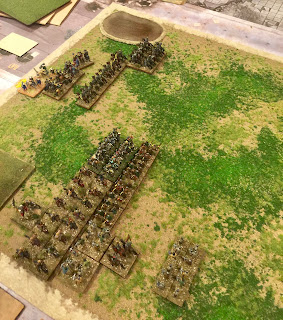 In the shooting phase, the right end Turcomans received 2 hits from the crossbow but passed their cohesion.  The crossbow took only 1 hit in return.  The Spear took 4 combined hits.  They passed cohesion but lost 1 base on the death roll

In the Seljuk 4th turn, the yellow Ghilmen (left end) moved 2 inches to straighten out the kink and turned to face the Green Knights. 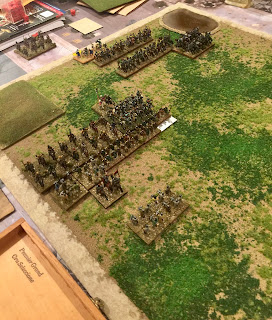 In the shooting phase, the crossbow scored 1 hit on the Turcomans to no effect.  The Turcomans scored 0 hits on the crossbow.  The Spear took 3 hits but passed cohesion.  The yellow Ghilmen only managed 1 hit. 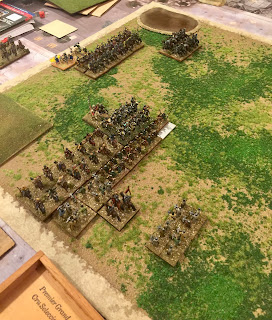 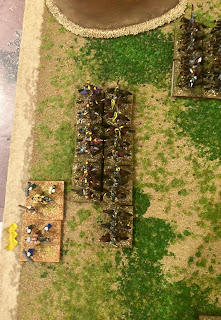 (Note the fragmented marker by the camp denotes the 1 point of attrition from the Turcoman that evaded off the table.)


In the movement phase, the Blue Knights attempted to turn 90 but fail the roll. 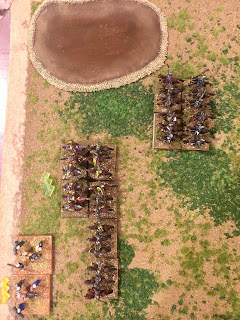 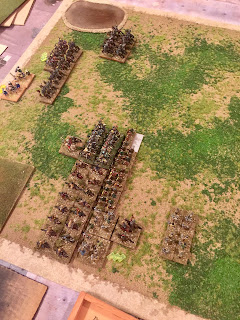 In the Seljuk 5th turn, There is no movement to be made.  The Seljuks scored no hits (out of 3 superior dice and 4 average).  The crossbow only managed 1 hit on the Turcomans in return. 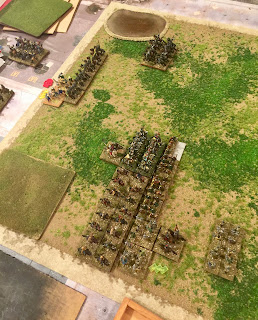 The game took around 1.5 hours.  The Seljuks were severely hampered by the 2 foot table and I will have to explore the possibility of a larger table.  I will need to complete several other playtests before then though.
- July 16, 2017