Today's offering is the latest playtest of FOG 300.  This time we have the Early Crusaders vs Komnenan Byzantine.

For the first time in the playtest series the Crusaders won the initiative and chose to take Agriculture. The Komnenan's took the compulsory open field, a gully and a gentle hill.  The Crusaders chose an open and a road.  This is the first time I believe all terrain pieces made it on the board.  The Byzantine side is to the left.  The Crusaders to the right. 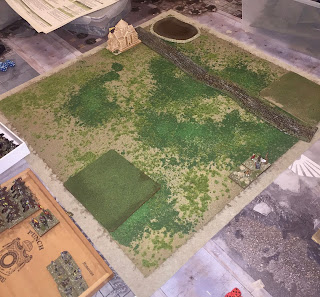 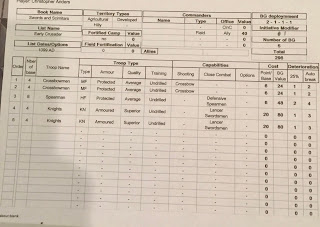 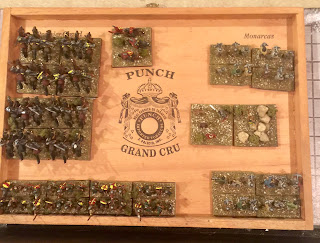 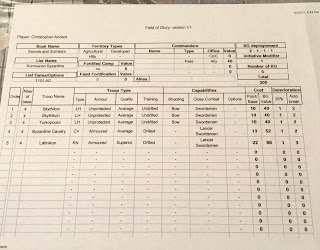 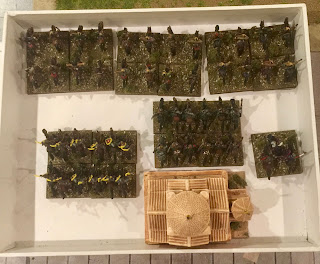 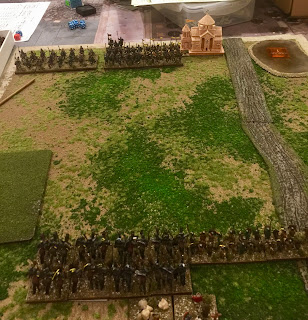 Here we have the Byzantine view of the Crusader line.  The two crossbow battle groups are on each end of the line:  one in the open field and one on the gentle hill.  The spearmen are on the road in front of the camp with the two knight battle groups filling in the gap between the spearmen and the field. 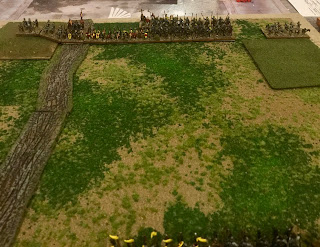 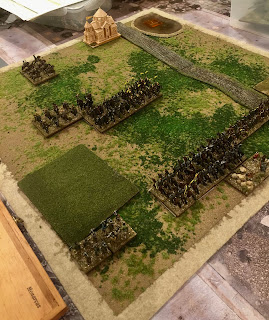 In their turn the Crusaders opted to move directly ahead to squeeze the Byzantine line and deny them room to maneuver.  The left flank crossbow angled across the field so they would be able to shoot at the Skythikon horse to their front but alas there were no hits on the heathen scum. 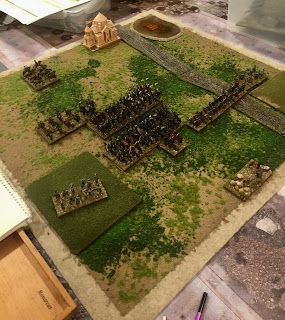 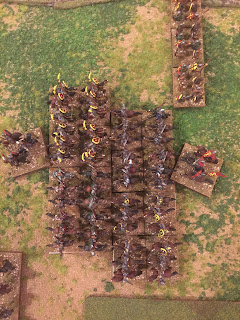 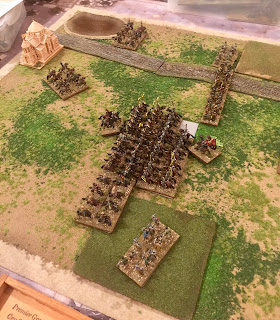 In the movement phase the Byzantines opted to move their Skythikons in ambush out of the gully while right flank Skythikons moved into overlap next to the Green Knights (this would prove to be mistake down the road).

In the shooting phase, the Skythikons in overlap took two hits from the crossbow and disrupted.

For the Crusader 2nd Turn, there were no charges but in the maneuver phase, both Crusader knights expanded.  The Green Knights expanded into the open field disordering the stand but trapping the Skythikon light horse in overlap.

The spearmen in the center failed a CMT to move short and sit for the turn.  The right flank crossbow move to within 6 inches of the outside Skythikon horse.   In the shooting phase, those same crossbow score two hits but the Skythikon horse pass. 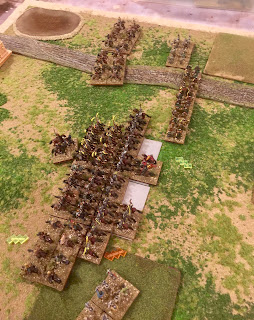 The Crusader attempt to rally the Blue Knights in Joint Action failed. 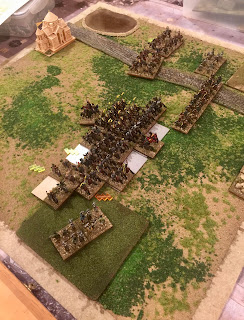 To start the Crusader 3rd turn, the right flank crossbow charge the battered Skythikon horse to their front.  In impact, both the Skithikon horse and the crossbow inflict 1 hit.

In the maneuver phase, the spearmen contract 1 file and move 3 inches straight ahead.  This positions the spearmen in a position to draw the 2 dice of shooting from the non disrupted Skythikon on the Byzantine right.

The right flank crossbow inflict 2 hits on the already disrupted Skythikon horse dropping it to fragmented. 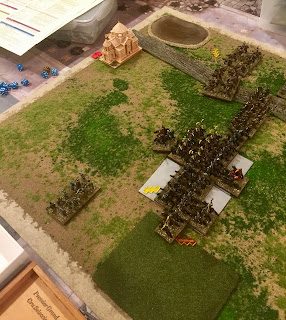 In the melee phase, The Blue Knights manage 3 hits to the 1 from the Byzantine cavalry but the Byzantines manage to survive both their cohesion test and the death roll.  The Green Knights inflict only 1 hit to the fragmented Latinikon while taking 2 in return.  They survive however and the turn ends. 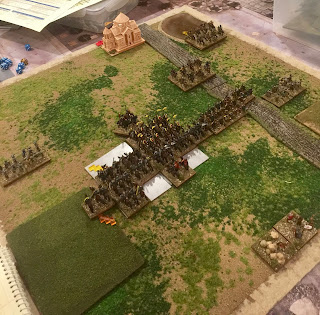 In the Crusader 4th turn, the spearmen opt to charge the Skythikon horse to their front who roll up 1 and stop a gnat's dodger in front of their camp.  They however only plod forward 1 inch.

The left flank crossbow pass a CMT and begin moving on the Byzantine camp.

There was no shooting to be had after the charge. 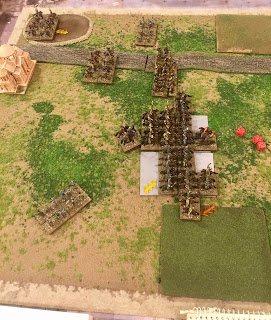 In the Byzantine 5th turn, there ended being no charging and no shooting after all the movement.

The Byzantine cavalry attempt to rally in the Joint Action phase but fail. 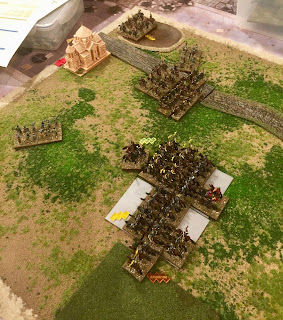 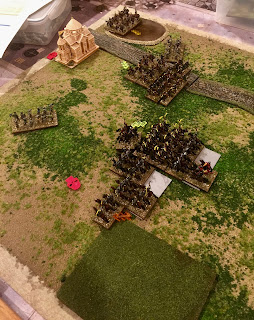 Game went much faster than the previous ones.  I am still thinking the table size needs to increase to 30" square to allow the mounted armies room to maneuver.  However, I have at least two more playtest that I want to get in before I change the table size.  All in all I think it makes an enjoyable game.  By the time I finish all of the playtests, I should have the campaign markers finished for a playtest of the campaign.