Unusual Documents in the Library

December, in the year of our lord five hundred and ninety eight since his ascension to heaven, the sixteenth regnal year of the reign of Flavius Mauricius Tiberius, Emperor of all the Romans.

Today as I continue my work of cataloguing the massive pile of documents found in the lower annex of the great library in Alexandria, I stumbled across a collection of scrolls addressed to a minor official in a town called Aela.  I am attempting to locate this place as I have yet to find it on any map.  That in itself would not have piqued my curiosity.  The first few scrolls I opened were mundane enough but in the third one I found a reference to a comes saraceni.  Tomorrow I will begin searching anew...


The above comments are the opening lines to story of a campaign that I am working on that will revolve around the Arabian peninsula in the 6th Century A.D. My focal point will be a fictitious Byzantine officer starting around 526 AD who is tasked with influencing the Pre-Islamic Bedouin and Arabian tribes.  I have almost completed the map and the campaign rules are progressing rapidly.  Next up will be to paint a suitable Early Byzantine officer to go on an Arab command stand to represent this comes saraceni.  Unfortunately, no one makes appropriate 15mm Pre-Islamic Arabs for this time period so I will be using a mixture of figures but mainly Khurasan 15mm for the Arabs with a few Forged in Battle and Essex miniatures thrown in to fill in the blanks.  My Comes Saraceni will be an Essex Late Roman officer while the remainder of the Byzantines will be Old Glory Belisarian figures.
- April 30, 2017 No comments:

Gateway to The Ganges


One of the many projects that I will come back to from time to time is this one.  I have almost completed enough Classical Indians to field three different 300 point Classical Indian Armies.  Shortly, I will have enough Hellenistics to morph them into Indo-Greek armies.

To complement these new figures, I am working on a  campaign that is set in Northern India just after the fall of the Mauryan Empire hence the name of this post.

The campaign rules are based on Jeff Jonas' Syrian Wars campaign rules found on his website, AncientBattles.com.  Although, his rules are for Warhammer Ancient Battles, I found them relatively easy to adapt to Field of Glory.  I am working on the map at the moment.  It will feature four 8.5 x 11 sheets forming a 2x2 master map.  Once I have it further along I will post it on the blog.

I might even be prompted to write a newspaper type series of posts to demonstrate progress.

Here is a picture of the host so far awaiting flocking. 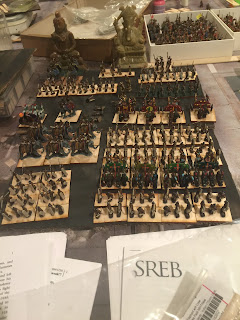