In the reign of the Illustrious King of Kings, Shahanshah of all Aryans and Non-Aryans, Khosrow I, the loyal subjects of the  Immortal Soul in the southern regions of the Arabian Desert petitioned the light of Mazda for relief from the depredations of the wicked Axiumites who had crossed the Red Gulf and practiced unspeakable acts against the loyal subjects of the lord of all Aryans and Non-Aryans.  In his magnificence, Khusrow I, the Immortal Soul, dispatched his most loyal general Vahrez Boes with a small force of dedicated soldiers to his subjects' aid.  In a short campaign, Vahrez Boes confirmed the Immortal Soul's trust in him, cast the evil Axumites out and restored Sayf ibn Dhi-Yazan to his throne.  Vahrez Boes then returned to the land of Aryans.

A short time later, the Auximites returned and killed Sayf ibn Dhi-Yazan.  The great Khosrow I, incensed by the acts of the Auximites, dispatched Vahrez Boes with a larger force to expel the Auximites once and for all.  In a short time, Vahrez Boes did just that and remained in the Arabian South to ensure the eternal peace for the loyal subjects of the Immortal Soul.

Yet, Vahrez Boes' work was not at an end.  The Auximites (with Roman Gold) stirred unruly elements of the populace south of Najran to oppose the will of the Immortal Soul and rose in rebellion.  Sheik al-Hamil ibn Said cast out Vahrez Boes' loyal representatives and treated them most unjustly.

As a consequence, Vahrez Boes gathered his forces and marched to find the recalcitrant Sheik and bring his people back to fold of the Immortal Soul.

On the road between Sana'a and Najran, the Sassanid forces met the revolting Arabs... 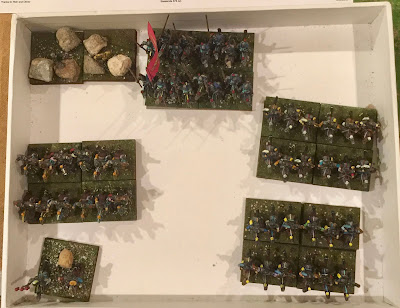 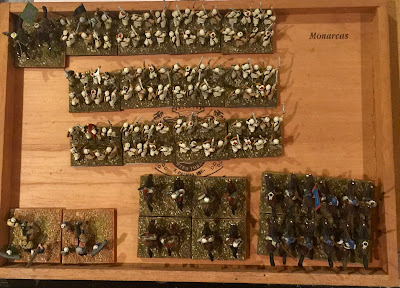 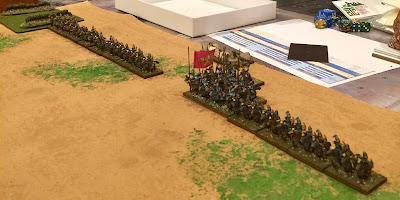 The Sassanids moved first.  The two Asvaran cavalry BGs on the Sassanid right moved a full 5" straight ahead to close the gap between the two armies.  The Cataphracts and the remaining Asvaran BG double moved forward shifting 1 single base to their right in their first move. With no shooting or melee, the Sassanid 1st turn ended. 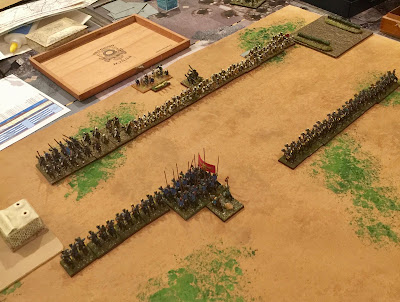 The Pre-Islamic Arabian 1st turn saw the Arabian foot move as a group straight ahead 3".  The Arabian cavalry opted to remained stationary.  There was no shooting at this point so the turn ended. 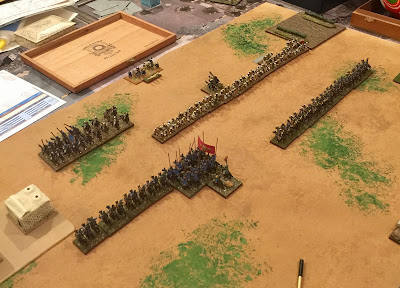 The Sassanid 2nd turn opened with the Cataphracts rolling not to charge - they held.  The Cataphracts and adjacent cavalry move to just short of 2" of the Arabian foot and just outside 5" of the City Cavalry.  The right flank Sassanid cavalry moved to within 3" of the Arabian foot.  The center Arabian foot took 3 hits in the shooting phase but shrugged off both the death roll and cohesion test.  All other shooting was forgetalble.  Thus the Sassanid 2nd turn ended. 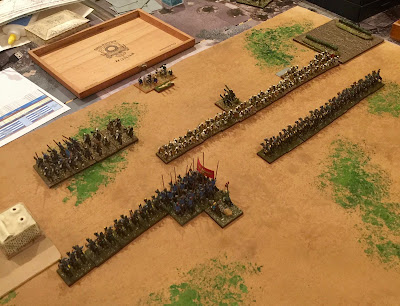 The Arabian 2nd turn opened with the right most Arabian Foot (the reds and whites right to left respectively) charging the Sassanid cavalry line to chase them off.  Both cavalry evaded with the Superior Asvaran moving normal and the average to their left going 2" short.  The red Arabian foot went 5" in pursuit while the white Arabian foot went normal.  The last Arabian foot (the blacks) failed a CMT to move short in front of the cataphracts so opted to sit.  The Bedouin cavalry moved to within 1.5" of the Cataphracts and the City cavalry moved to stay on line.  The Sassanid shooting against the City cavalry had no effect so the Arabian 2nd turn ended. 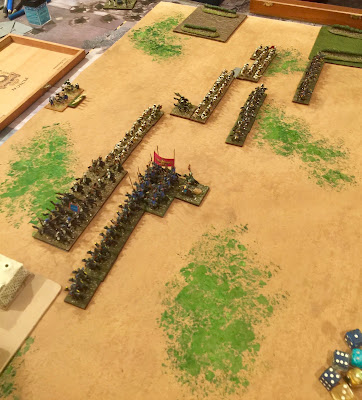 To start the Sassanid 3rd turn, the Cataphracts charged straight ahead.  The Bedouins evaded, rolled normal move and stopped just short of going off the table.  The Cataphracts plowed into the black Arabian foot with one base making contact.  In Impact, the Cataphracts scored 2 hits to none which was catastrophic to the Arabs as the Arabian foot lost a base and double dropped to fragmented.  In the Movement Phase, the Cataphracts slid to their right to conform and the Arabs covered the 2nd file of the Cataphracts.  The two right flank Sassanid cavalry BGs turned around and sat.  The left flank cavalry BG made a CMT and backed up 2" and turned back around.  Sassanid shooting again had no effect.  In Melee, the Cataphracts scored 3 hits to 1.  The black Arab foot passed the death roll but failed cohesion and is caught in the pursuit after going 1" losing another base.  No-one cared about the broken Arab foot and in Joint Action the Cataphracts stopped pursuing while the broken Arabs went another 2".  The Sassanid 3rd turn ended at this point. 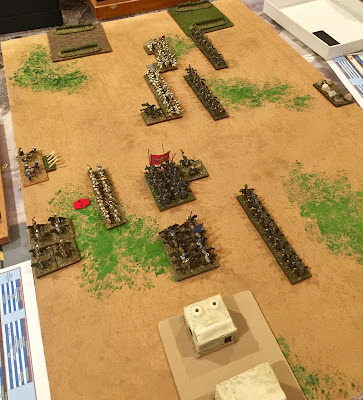 To begin the Arab 3rd turn, the City Cavalry charged the Sassanid cavalry to their front who evaded 3" back while the City Cavalry pursued forward 5.  The red and white Arab foot on the other end of the Arab line also charged and the Sassanid cavalry to their front evaded.  The right most Sassanid cavalry went 5" and the next one went 7".  The Arab foot lumbered along with the red Arab foot going 2" and the black Arab foot going 3".  In the Movement Phase, the Bedouin cavalry turned 90 and wheeled forward 4.5" to get out of the way of the fleeing Arab foot.  As there was no shooting or melee, the Joint Action quickly arrived and saw the broken Arab foot fleeing 3" to towards the table edge, ending the Arab 3rd turn. 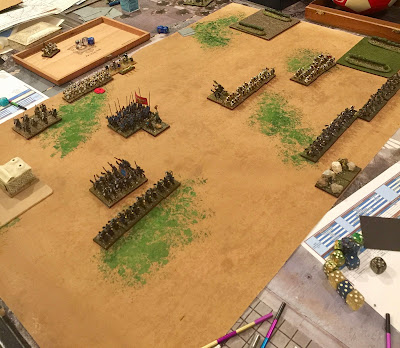 The Sassanids 4th turn opened with no charges.  All three Asvaran BGs turned 180 in place to face the Arabs.  The Cataphracts turned 90 in place.  The Asvaran Bg facing the Arab City Cavalry was the only unit within shooting range but had no effect.  The Joint Action Phase saw the broken Arab foot exit the table ending the Sassanid 4th turn. 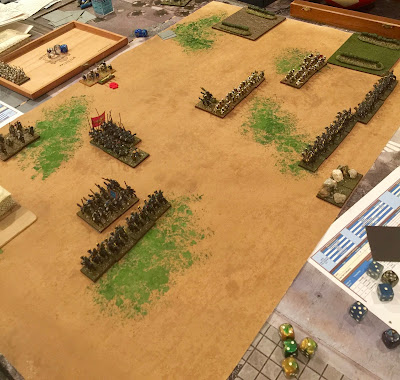 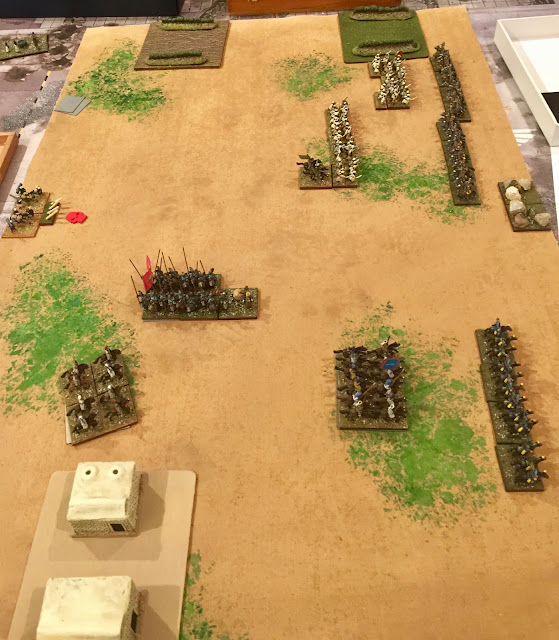 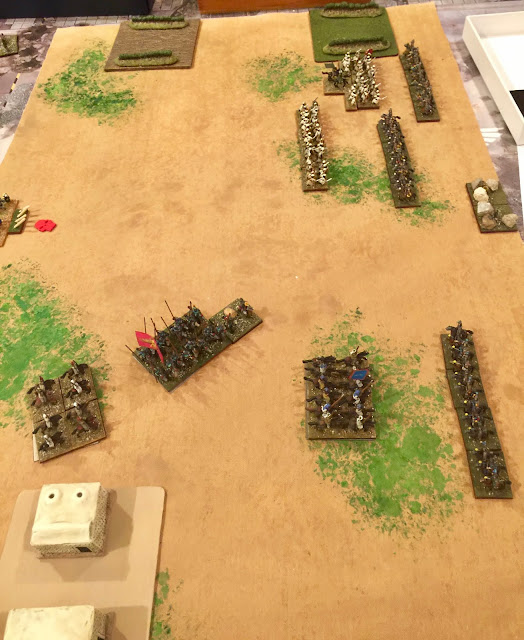 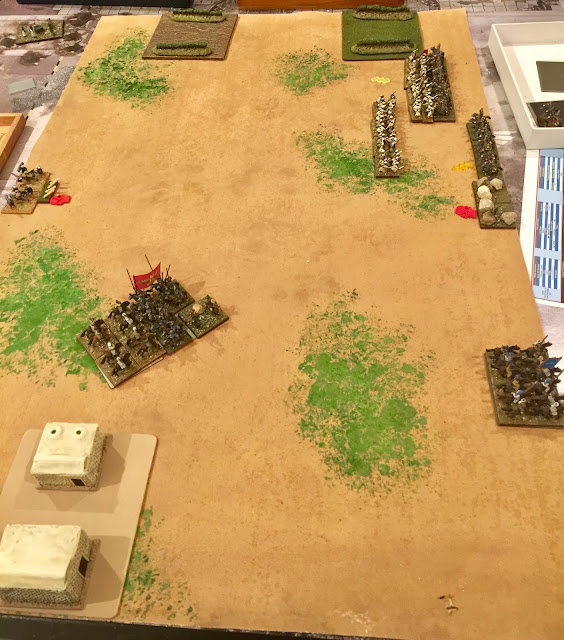 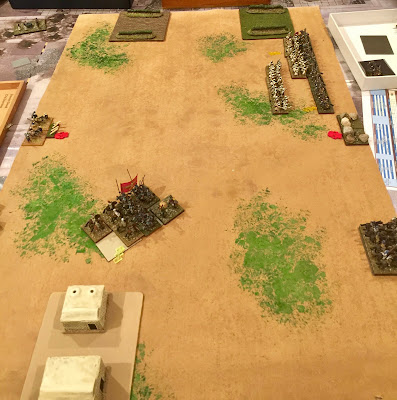 To start the Arab 6th turn, the white Arab foot charged the fragmented Sassanid cavalry to their front who broke for being charged while fragmented.  The game ended at that point.  Total playing time 1.5 hours. 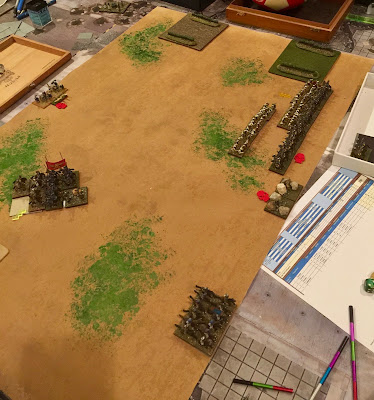 Vahrez Boes, seeing the Asvaran on the far right of his line giving way, orders the rest of the army to withdraw towards Sana'a.  The Arabs, leaderless, mill around the field stripping the dead Persians of all of their wealth.  None stop to think that maybe they should pursue the disorganized Persians to end the fight today.  Vahrez Boes swears to return and crush the rebellious Arabs, but that is another story...

Just finished book 3 of Jack Ludlow's trilogy on Belisarius.  Personally I think his trilogy on the Normans in the South of Italy was better overall but as I have an interest in the Early Byzantines, I am googling up everything I can find. 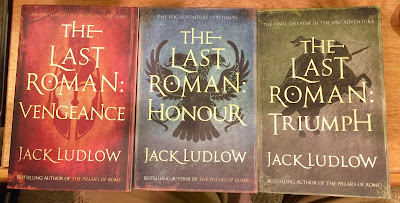 I will be starting the Legend of Africanus trilogy about the illustrious general tonight by Matthew Jordan Storm as I anxiously await the third book in Paolo A. Belzoni's Belisarius series.  Nothing new Ludlow's book and he really just glossed over his later campaigns.  He did paint a vivid picture of the animosity Theodora held for our hero, though.
- May 05, 2018 No comments:

Just finished going through the Army Book 2 and have updated Appendix A in the FOG 300 Supplement with terrain for each of the ally lists in the appendix of Book 2.  You can find the latest using the link below: