I have added a new page to the blog (FOG Archives) and will be adding another to house old GCC Content.  The impending demise of the Yahoo Groups finds our community with a need for storage of old content before it is lost forever.  I am starting with the US FOG Team Tournament content first and will add more as I have an opportunity.

The GCC Archive page has now been added with the 1st year of the Gulf Coast Monthly Newsletter uploaded.

The US FOG Team Tournament results for 2009 are now up on the FOG Archive Page.

The GCC Archive page now has the Gulf Coast Monthly Volume I uploaded.

The perfidy of the usurper Artabanus IV knows no bounds...he has induced the tent dwellers of the southern deserts to invade the lands of the empire and directly threaten the true King of Kings, Vologases VI.  The vermin of the desert under their lord have pillaged the lands on the western side of the Euphrates, crossed the great river and are now marching on Babylon.  The true King of Kings has marshaled his forces and has met the enemy in the land between the two rivers. 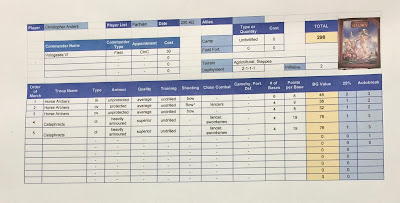 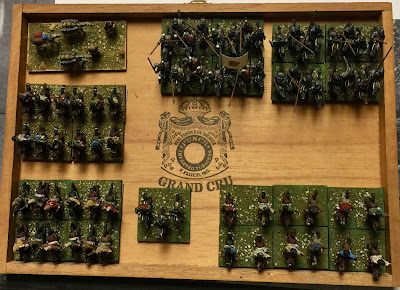 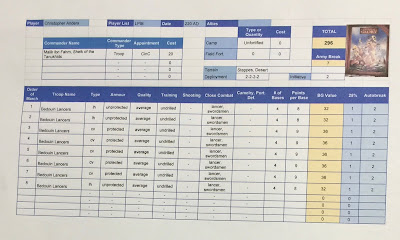 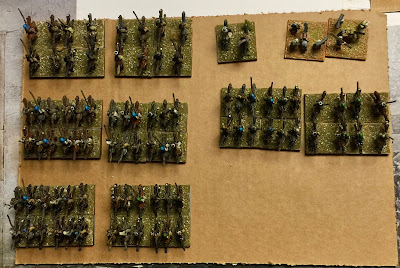 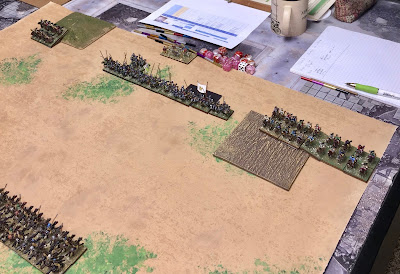 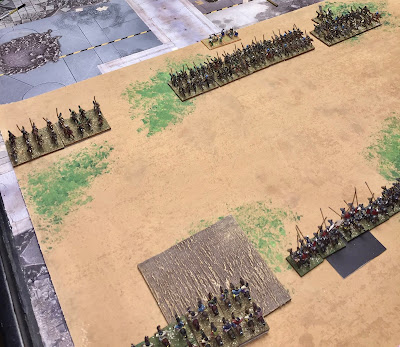 To complement winning the initiative, the LPIB moved first.  The two light horse BGs on the LPIB right advanced 7" towards the brush.  The light horse-cavalry group double moved to just outside of 5" of the Parthian cavalry on the hill (including a single base slide towards the top of the picture in their first move).  The center group of lancers moved 5" straight towards the cataphracts.  With no shooting to be had, in the Joint Action Phase the LPIB leader moved to the closet BG in the center and the LPIB first turn ended. 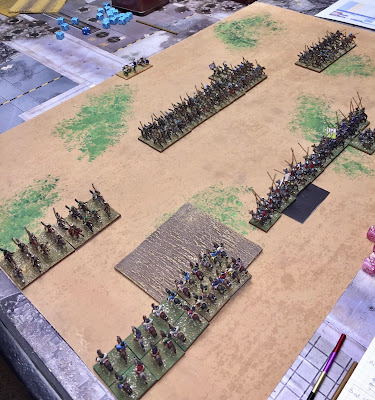 For the Parthian 1st turn, the light horse/cavalry grouping in the brush moved to within 3" of the Bedouin light horse to their front.  In retrospect, the cavalry should have moved as far forward as possible in an effort to get out of the brush.  The bow*/lance armed cavalry on the hill moved to within 4" of the light horse opposite them at the top of the picture below.  The cataphracts moved as a group 4" straight forward.  In the shooting phase, the Parthians shooting out of the brush managed a few hits but to no effect while on the other end of the field, the bow*/lance cavalry disrupted the light horse opposite them. 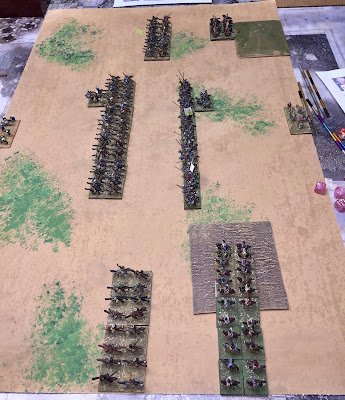 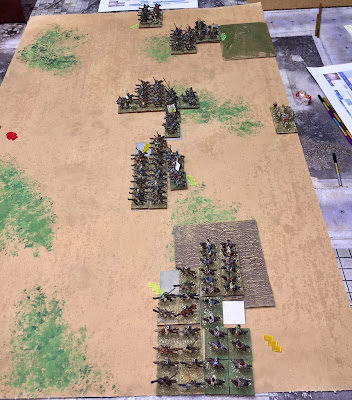 To start the Parthian 2nd turn, there were no charges to be had so in maneuver, the Green cataphracts shifted a base to cover the overlapping Bedouins.  There was no shooting so into melee the turn proceeded.  The Parthian light horse again scored no hits while taking 2 in return but managed to roll out of the death roll and cohesion test.  The Parthian cavalry in the brush managed only 1 hit and took 1 in return for a draw.  In the center, the Red cataphracts scored 1 hit to the BG on their left and 0 to the one on their right.  The left BG managed 0 hits in return while the right did 2.  The losing Bedouin BG lost a base to the death roll and then dropped to disrupted on cohesion.  The Red cataphracts survived the death roll but dropped to fragmented on cohesion.  The Green cataphracts scored 2 hits to its opponent and took one in return.  The Bedouins lost a base on the death roll but survived cohesion.  The Parthian bow*/lance cavalry continued their dreadful performance and lost 3 hits to 2.  Even though they survived the death roll, they failed the cohesion test to drop to fragmented.  The Bedouin leader moved in the Joint Action Phase to the BG on the right of the Red cataphracts and attempted to bolster but failed. 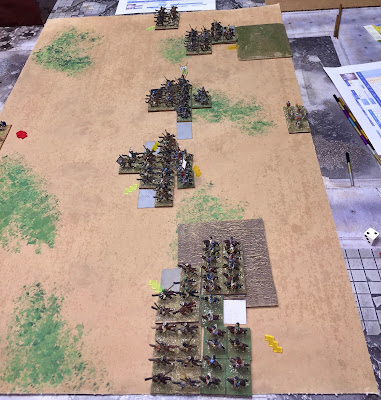 To start the Bedouin 3rd turn the disrupted light horse attempted a CMT to charge the fragmented Parthian bow*/lancers but failed and settled for moving forward 5"and turning 90 to be on the Bus flank.  Again there was no shooting so into melee the turn proceeded.  The Parthian light horse managed 1 hit total and took 2 in return bit somehow managed to pass both the death roll and the cohesion test.  The Parthian cavalry in the brush swapped 1 hit for 1 hit to end in a draw.  In the center, the fragmented Red cataphracts only had 1 dice and opted to through it against the BG with the Bedouin leader.  1 hit was scored by both sides in this melee ending in a draw.  The Green cataphracts managed 2 hits to 1 in its round causing the Bedouins to its front to disrupt.  The Parthian bow*/lance cavalry scored 2 hits to 3 and subsequently broke on cohesion routing off the table.  Their Bedouin opponents pursued 4".  In the Joint Action Phase, the Bedouin general attempted to rally the BG he was with once again and failed a second time. 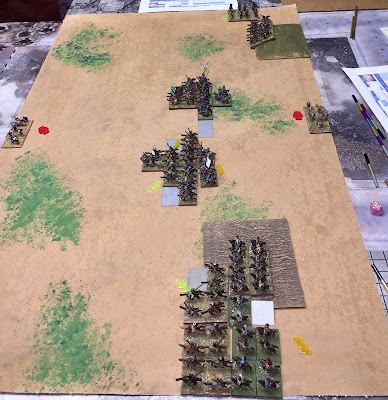 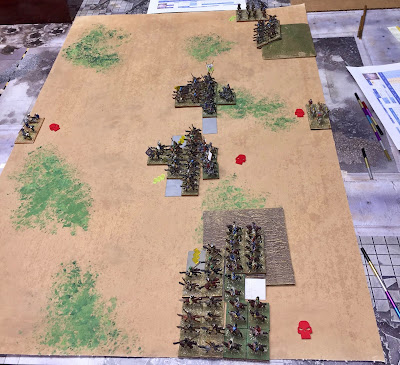 As his forces streamed from the field, Vologases vowed to get revenge on his perfidious brother, Artabanus the Snake...

Game note:  The Later Pre-Islamic Bedouin Ally list maximum numbers were increased to allow for a 300 point to be fielded as the max that can be fielded under the current list is 202 points.

Whenever I start a new project, I will grab everything I can find to provide more depth to my knowledge and give more flavor as well as to continue to inspire my zest for the period.  To that end, I have put together a document of all of the background information I have been reading through for others who might be interested.  I have made it into a Google Doc viewable by anyone with the link for ease of access.   Follow the link below to check out the collection:

Broken Rays of the Sun Inspirational Reading
- October 05, 2019 No comments: