49 BC and the Republic is on the ropes

While Caesar and Pompey jockey for position in the Balkans, their cohorts battle each other in the Levant.  (Well, not really.  More like a playlets of Average Joe lists for HUBCON 2019).

Winning the initiative, I opted for agricultural.  Joey tried to squeeze the table down against all of my cavalry but it did not work so well as everything fell on his side of the table.  A plantation was on his left with an open field then a gentle hill and another open field on his far right.

He brought a 6 pack of Numidian LH and a 6 pack of LF javelinmen to screen his left along with a BG of protected Gallic cavalry.  This was followed by 6 6-stand BGs of legionaries and 3 4-stand BGs of Legionaires for support.

I opted for a 4 pack of Syrian Horse Archers along with a 4-stand BG of Armoured Gallic cavalry and then 3 8-stand BG of Legionaires, 2 6-packs of legionaries, a 6-stand LF archer BG, an 8 stand Thracian MF BG plus 2 protected lancer cavalry BG and a LH lancer Bedouin ally.

Both of us decided to spend  the points and brought our legions as skilled swordsmen.

Not one to stand on ceremony, once I won the initiative, I sent my legions forward towards the enemy.  Joey, being well...Joey, did not disappoint and sent his forces forward to meet me.

I did not take notes but in the pictures below (that I took after each of my turns) you can see the action was fast and furious.  By the end of my 5th or 6th turn, it was over.  My dice was their usual awful selves so Joey was able to take the win.  It took less than two hours.  In fact, an ADLG game was being played next to us and was still a long way from resolution when we finished.

There will be a rematch in the coming weeks.  The decision is whether to bring Classical Indians or try another LRR list. 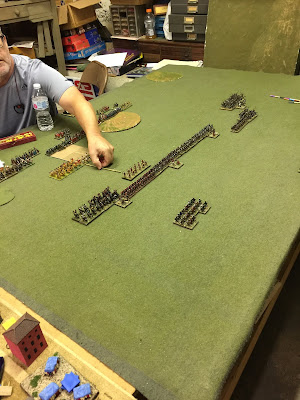 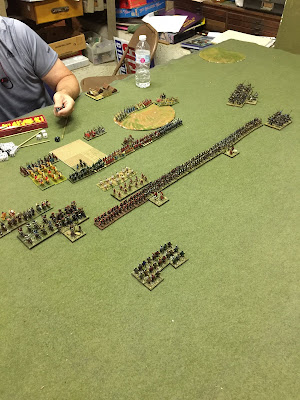 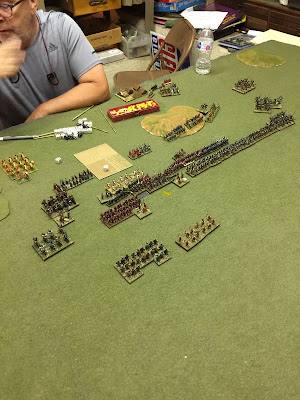 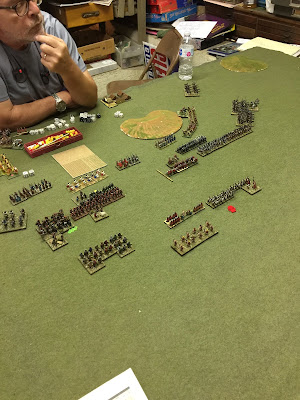 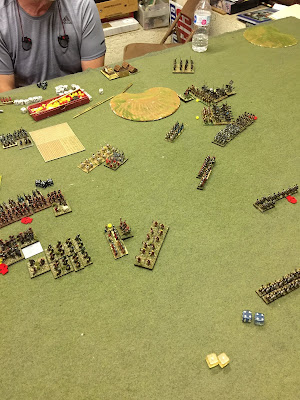