FOG 300 Late Republican Romans vs Early Germans circa 49 BC

I have been busy working on a new campaign as well as packing for a move so playing time has been limited as of late.  This morning, however, I worked in a game of Late Republican Romans vs Early Germans.  The new campaign I am working on features the Germans pushing on the Rhine frontier after Caesar has crossed the Rubicon and left scant forces in Gaul to (mainly) keep an eye on the Gauls.  In this scenario, first rate Roman Legionaires are at a premium.  Consequently, the Roman commander must ensure that he husbands his superior legionaries.  Additionally, the Roman player must have allies (whether German or Gallic) to field full size armies in FOG (600 plus points).  More on the campaign rules later.  I have a draft of a map but I am not happy with it and want to refine it further before putting up for everyone to critique.

"Germans have crossed the frontier near Vetera. Tribunus Septimus Aurelius Mercurinus has ordered the 7th, 8th & 9th cohorts from the lands of the Eborones to converge at Vetera to send them back across the Rhine. We suggested that we send to Mongantiacum for the Primus Pilus but the Tribunus would not be swayed. As we are all newly promoted to the centuriate, we were not confidant enough to force the issue with him. The Tribunus found a force of auxiliary Gauls to provide cavalry support but I suspect we will be outnumbered by the Germans nonetheless." - From the diary of Centurion Decimus Aquillius Hiberus,  the Ides of March in the seven hundredth and fifth year since the founding of Rome (49 BC). 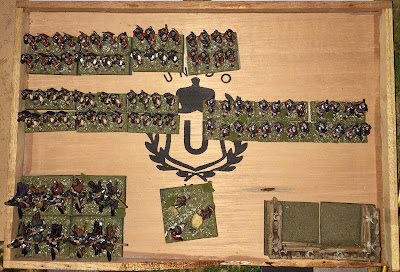 With the exception of the general's base and camp, all legionnaires and the cavalry are Old Glory and painted by Thomas Demers. The general's stand was painted by me and is also Old Goory. The camp is a scratch built affair that I acquired at Bayou Wars several years ago. 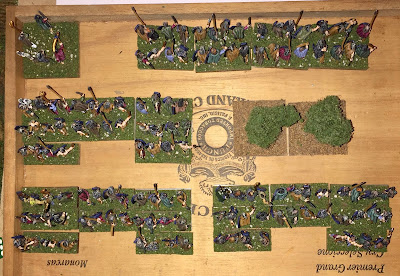 All of the German foot are Forge in Battle miniatures with an occasional Essex figure thrown into the mix and are a mix of all of the FIB German Warband packs. About 95% of them were painted by Mark Kernan of The One Tree Painting Service out of Northern Ireland. The German camp is from another army I put together several years past. i had planned on using them as ambush markers. I have a real camp on a 40mm by 80mm base that I hope to have finished in the next few weeks for the German hordes.

The Germans won the initiative and opted for Agricultural. The Romans wanted to close the battlefield down to help offset the German numbers and took the compulsory open field, then took a second open field and the gentle hill. The Germans settled for an open. All of the terrain managed to fit on the table but then the Germans removed one of the open fields by rolling a 6. 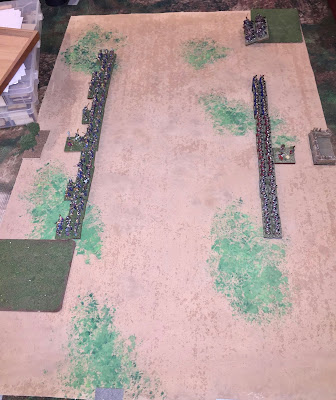 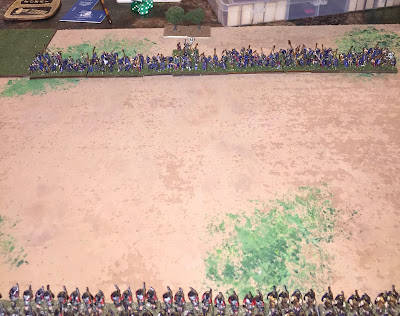 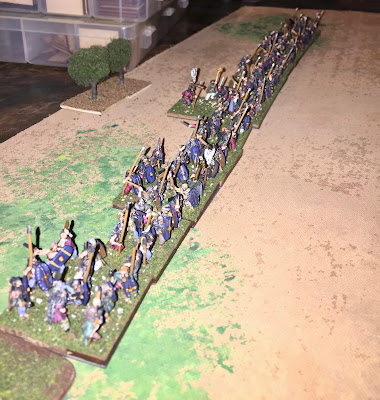 The Romans deployed with cavalry off to the left near the gentle hill. The blue shielded legion anchored the left of the main battle line, with the eight pack red shields in the center and the tan shielded legion on the right. The Roman commander opted to begin with the red shields. 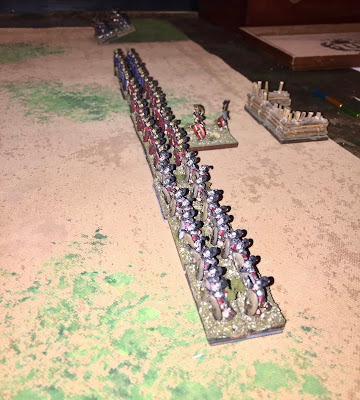 The German chieftain seized the initiative and moved the three warbands centered on the superior group a double move straight ahead stopping just outside of 5 inches of the Roman battle line. The average warband closest to the Roman cavalry moved 4" forward and shifted one base to be more in front of the cavalry. In the Joint Action Phase, the German chieftain moved to the Boar standard war band (on the left of the superior battle group). Thus ended the German 1st turn.

The Romans chose to move the entire legion line straight foward 3". The cavalry moved 5" towards the German flank warband slightly angled towards them. The Roman commander decided to stay with the Red Legion and the Roman 1st turn came to an end. 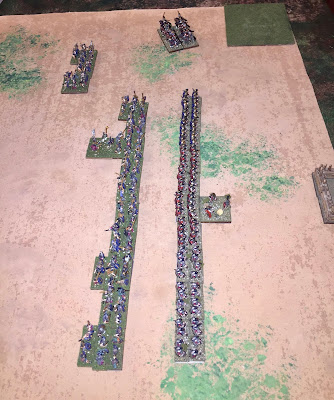 Here is a close up of the battle lines after the Roman 1st move from the Roman and German perspective. 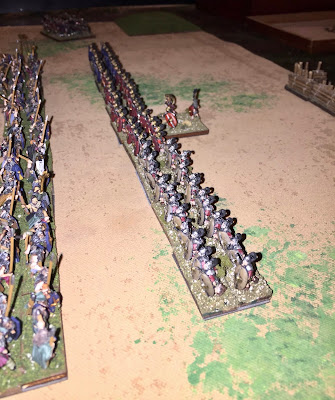 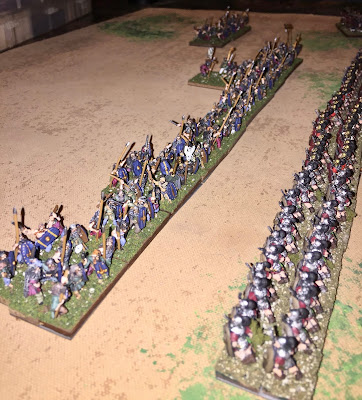 The German warbands opened up their 2nd turn by charging the three grouped warbands straight ahead. The Roman leader joined the front ranks of the Red Legion to inspire his boys against the superior German warband. The Tan legion took on the Bull standard warband on the German right. The Red Legion took on the Superior warband. The Blue legion faced off against the Boar standard war band. Impact was very bloody for both sides. The Tan legion gave 5 hits but took 6 in return. The Red legion gave 4 hits but took 8 in return. The Blue legion also gave 5 but took 6 back. Although the Roman general emerged unscathed, all three legions suffered a base lost. Both the Tan and Blue legions dropped to disrupted. The Superior warband and the Boar standard warband suffered a base lost as well. In the maneuver phase, both German warbands on the end of the main combat expanded a file to provide an overlap. The remaining uncommitted warband passed a CMT and wheeled towards the Roman cavalry. To start the melee phase, the German chieftain joined with the Boar standard warband to fight in the front rank. The Tan legion then scored 2 hits to none. The opposing warband emerged unscathed though from both its death roll and its cohesion test. In the center, the Red legion scored 4 hits to 1. The superior Germans then proceeded to lose a base due to hits and rolled snake eyes to double drop to fragmented. The Blue legion managed no hits to the Boar standard warband who scored 2 hits. Although the Blue legion did not lose a base to hits, they managed to roll low enough to drop to fragmented. As both generals were fighting, there was nothing to do in Joint Action and the German 2nd turn ended. 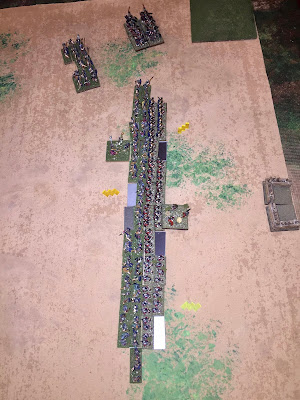 To start the Roman 2nd turn, the Roman cavalry advanced to 2" of the uncommitted German warband so as to pin them on the flank. In melee, both the Tan legion and the warband opposite scored a single hit. In the center, the Red legion scored 5 hits to 1 from the superior German warband who lost a base and then broke on cohesion. The Blue legion managed a single hit but took 6 in return, lost a base and double dropped to break. The Red legion cared little for its Blue legion brothers and emerged unscathed from seeing friends break. On the German side, the Boar standard warband with the general cared little for the breaking Superiors but the Skull standard warband on the opposite end of the line double dropped to fragmented by rolling snake eyes on their cohesion test. In pursuit, the Superior warband routed 2" and were caught by the victorious Red legion dropping the superiors to 50%. The Blue legion on the other hand broke contact with their pursuers by fleeing 4". Their pursuers only followed 2". In the Joint Action Phase, the Red legion stopped pursuing. The Roman general moved to the Tan legion and attempted to rally them but failed miserably. At the end of the Joint Action Phase, the Superior German Warband was removed from play. 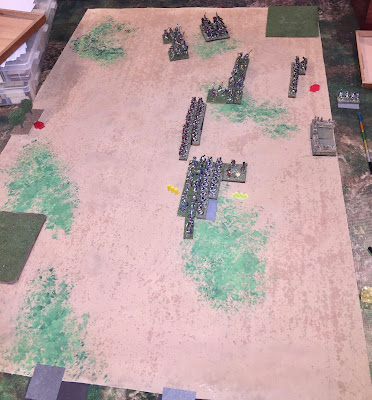 The German situation was somewhat desperate to start their 3rd turn. The warband opposite the cavalry decided to charge and hoped to quickly do away with them. Impact gave the war band 3 hits to 2 but the cavalry easily rolled off the hits and passed the cohesion test. In maneuver, the warband facing the cavalry expanded one file to the left to enable all 8 stands to fight the Roman cavalry. The warband with the German general attached turned 90 degrees to face the center and be just behind the Roman Red legion in the center. In the melee phase, the battle at the top of the table resolved itself with the German warband hitting the Roman cavalry 3 times to 1. Again the Roman cavalry easily rolled out of danger from the hits and the cohesion test. At the bottom of the table, the Roman Tan legion scored 2 hits to 1 from the fragmented Germans who managed to pass their death roll but broke on cohesion. In pursuit, both the Germans and the Romans went 4" causing yet another base lost to the routing Germans. With the resolution of the pursuit, the game ended with the Germans broken. 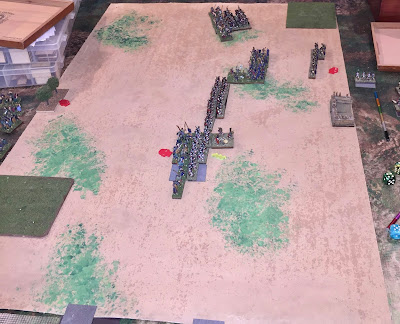 On reflection, the German impact phase in the 2nd turn had the possibility of being extremely disastrous for the Romans (20 hits by the Germans to 14) but the Roman cohesion dice balanced it out. The scenario, meant that the Romans would all be average which makes it very harry when the average German war bands deploy three deep and get the Superior bump in impact. The Romans will have to use their Generals very wisely to counteract this in the future. All in all, another fun game that will play well into a project I have on the table.